Bali seemed like a good idea for this school holidays.  It just fitted our time frame perfectly. Since le hubby couldn’t get much time off, so 8 days in the island of paradise was just what we needed.  We actually didn’t really plan to go to Bali again, since our last visit was in February, for my birthday.  But, you know what…we gotta do what we gotta do 😜

We flew with Batik Air for the first time and the flight was good except for a bit rough landing at Ngurah Rai Airport.  We got fed but unfortunately the in-flight entertainment  system didn’t work at that time.  It worked perfectly on our flight back home though.

🏡Where did we stay…. 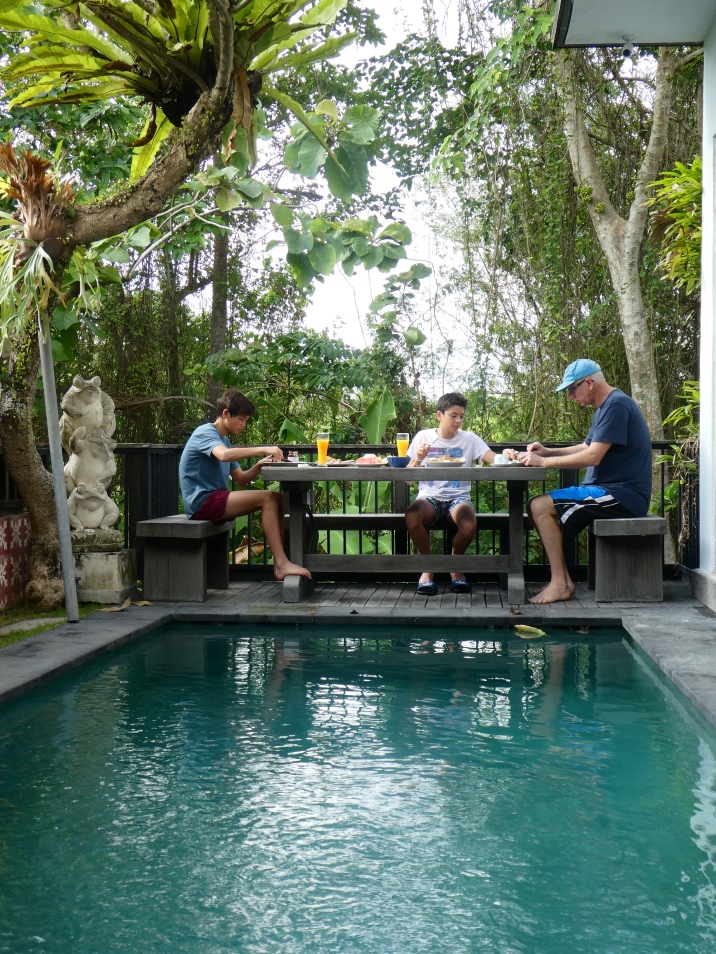 Le hubby wanted to stay in Canggu area.  This was our second time staying in Canggu.  We rented a villa somewhere with a little creek as our backyard and a pool view from our bedrooms.  It was in a quiet area with a maid, or housekeeper should I say, who served us breakfast every morning and did whatever we asked her to do. What spoilt brats were we!  She’s pretty good and fun. I wanted to take her home with me!

As you know, my little crew, le hubby and les garçons, can be a pain sometimes.  They don’t like crowded places with lots of people, they can’t stand the traffic, and they are picky about certain things.  So, to find some places to go which are not too touristy or so many people in the high season…can be a BIG headache for me!

I found this waterfall through reading my fave blogger post who has recently been there and I thought it was cool.  Indeed, it was.  Tukad Cepung waterfall is located 30km north east of Ubud.  It’s one of Bali’s hidden gems and still not that touristy yet, even our driver, who is a local Balinese, had never been to this waterfall.  And so we got lost many times until I remembered to use  google maps on my mobile! 🙄  A few hundred stairs down the cliff is worth the effort once we arrived at the waterfall.  The circular cliff gave us the feeling of being in the cave, while the open sky, right from where the waterfall emerges, gave us the amazing view.  Unfortunately the sun was in and out on that day so it was hard to get a good shot.  Try to get there between 10 am – 2 pm, and bring your bathing suit, because the waterfall is magical and you will be tempted to go in and embrace it. PS: don’t wear high heels or wedges ok👌🏻

After Tukad Cepung, we were off to Tibumana waterfall.  In my personal opinion, Tibumana was not as beautiful and impressive as Tukad Cepung waterfall.  Tibumana isn’t the biggest or tallest waterfall in Bali by far.  Its tucked down in the jungle, and only 30 minute drive from central Ubud.  We didn’t swim here since there were already a lot of people swimming.  And you know, when there are people, le hubby and les garçons seemed to have some kind of allergic reaction. People = run away.  #boganpeoplesyndrome #avoidpeople

Tegenungan is one of the popular waterfalls amongst tourist in Bali.  So, you know when we got there (after did the Ayung river rafting) it was pretty much full of people.  Its located between Ubud and Denpasar, so it’s not that far away, you can reach it within half hour.  The falls are only several minutes’ walk down the trail beyond the shops and some cafes.  As you can see in the picture, there were lots of people at Tegenungan, so of course we didn’t spend long time there😜

After all the waterfall visits, we went to Ubud and spent the afternoon/evening at our favourite cafe Batan Waru, I also went to window shopping at Ubud market.  Hubby did the “spur” walk again…..boring. Love Ubud 💚

We caught a fast 30 minute boat to Nusa Penida.  Our boat left Sanur at 8.30am and arrived in Nusa Penida at 9 am on the dot.  There was a car and driver that we rented for a day trip.  First stop was Kelingking Beach and yes it blew me away.  Kelingking beach was so gorgeous.  Sadly, we didn’t have enough time to go down to the beach to swim!  Second stop was Angel’s Billabong, that disappointed me.  Despite the crowd, Angel’s Billabong was not as picturesque as I thought.  It was so difficult to take a picture without people in it.  Third stop was Broken beach, which was ok but again so many people taking selfies and photos so it was impossible to enjoy the serenity and beauty of the place.  Le hubby managed to take some pics of me without any crowd tho😃. After lunch, we continue to our last destination of the day which was Crystal Bay.  Here we spent about 2.5 hours, snorkeling and swimming before catching our 5pm boat back to Sanur.  Nusa Penida is still raw and beautiful so we made a promise to go back there again in the future to explore more.

It was my second time rafting in the Ayung river and first time for my boys. Ayung river is the best rafting location for family.  For $AUD 25 we got 2 hours rafting along Ayung river, with lunch included, what a bargain! We had good fun.

🌿 We also went to Suluban beach in Pecatu, attempted to do some swimming but the waves were too big.  Instead we just ate at one of the restaurant and enjoyed the view.  Went to Nusa Dua and swam in the sea.  We spent Sunday at Fins beach club which was not very satisfying for the crew, as it was crowded.  The Lawn beach club also was not a success, too crowded too many people….ruuuun💨 💨

🌿 Spent an afternoon after rafting at La Laguna.  This place is so instragrammable, and lush.  I love the garden and the setting.  Le hubby swam in the sea and we had some nibbles and drinks while waiting for the sun to set.  What I don’t get, the menu is mainly western food with only 3 Indonesian dishes, and the price is a bit over the top.  I guess customer pay for the view and ambience.

🌿 The rest of our time we spent it in Canggu area.  Echo and Berawa beaches were our main play ground.  I also checked out the shops along Batu Bolong and this time I didn’t get asked to leave the shop teehee… I must have looked decent this time!😜

I did yoga one morning at Udara Bali at Seseh beach.  It was good that we had the ocean as our view while we did the vinyasa poses.

While we are on holidays we usually try to eat local food.  In Canggu there are so many cafes and restaurants, and unfortunately we are not big on culinary skills.  In fact, we try to eat cheap but good, without giving le hubby and les garçons Bali belly.  Our usual eating place in Canggu were Echo Beach Club and Cabe Cafe right at Echo beach.  We also tried Old Mans for dinner one night and Cucu Warung.  Ji Restaurant in Batu Bolong was pretty good, it was Japanese fusion food.  The restaurant itself was so cosy, unique and of course instagramable.  I didn’t take a lot of pictures of the surroundings as I was busy eating and enjoying the atmosphere, plus it was in the evening so the lighting wasn’t that good. If you are ever in Canggu, try to eat or have a drink/nibbles at Ji and sit upstair.  Another recommendation is Dandelion.  The food was average but the atmosphere and interior were so gorgeous.

For your happy soul, healthy body and relaxed mind, try Therapy for massage.  I like its cool, slick, and dimmed inside. It’s a lovely change from the bright and humid outside. My boys had 30 minutes each massage while I had an hour full body massage and it only cost $AUD50 for three of us. The place is clean and one of the most recommended massage place by Tripadvisor.  Therapy Canggu, Jl. Batu Mejan, Canggu.

A highlight for my boys was the motorbike rides.  So, le hubby rented a motor bike for getting around the Canggu area.  It’s $AUD6 per day and we just kept it at the villa when not in use. We all love the motorbike rides. Since I can’t (and I’m not dare to) ride a motorbike,  sometimes ,to save le hubby back and forward, I  used Gojek.  Gojek is also very cheap and reliable.  Just a note, certain areas in Canggu only allow drop off on Gojek.  But most of the time I could get Gojek no problem.

I hope you are not bored reading my long enough ranting about our time in Bali.  One thing for sure, I will never get bored with Bali, though at some places, the traffic was really crazy and the crowd was a bit annoying, but Bali never fails me ❤️

Here’s a little vid of our time in Bali.  Shot and compiled by my darling son N, on Go Pro Hero 5.

🌴 because bali is always a good idea! 🌴 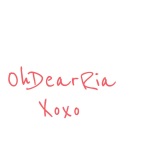 Hi I'm Ria! A hippie heart and gypsy soul mama who loves plants, yoga, blue & white chinas, & thrifty finds. I like to bake and cook something delicious (and healthy) for my twin boys and le hubby. I have golden retriever dog named Sammy, and couple of love birds. I take my boys to sports as early as 5 in the morning and on the weekend. On this blog, I'm mostly rambling about my every day life as an everyday mama, wife, and human being who live in the suburbs. I love sharing snippets about my family, our adventures and holidays. So, if you like what you find here please stay with me. If you don't, simply just close this page. Thanks for dropping by and I hope you enjoy reading my stories. xx