As you’ve probably known from my IG stories and feeds that my two monkeys and I went to Vietnam for this summer holidays.  It was just for a short period, last get away before school starts.

As this was our first time to Vietnam sans le hubby, we chose Saigon and the south area of Vietnam.  I prefer to call Saigon rather than Ho Chi Minh City, it sounds more simple and traditional to my ears.

As per usual, le hubby booked us on red eye flight 9.15 pm from Perth, arrived in Singapore at 2.15 AM and our connecting flight to HCMC was at 7.30 AM.  So we had about 4.5 hours to kill in Singapore.  To cut the long story short, after looking for lounges to sleep with no success we ended up sleeping on the floor at Changi airport.  Yeah….some of you might think it was gross, or unsophisticated, disgusting, or whatever,  but what else could we do? We needed to sleep or rest our eyes, all the lounges were fully booked, we didn’t want to spend SGD $400 just for couple hours for hotel, so thank you dear hubby! As he said, that’s the true travellers, blaah!! 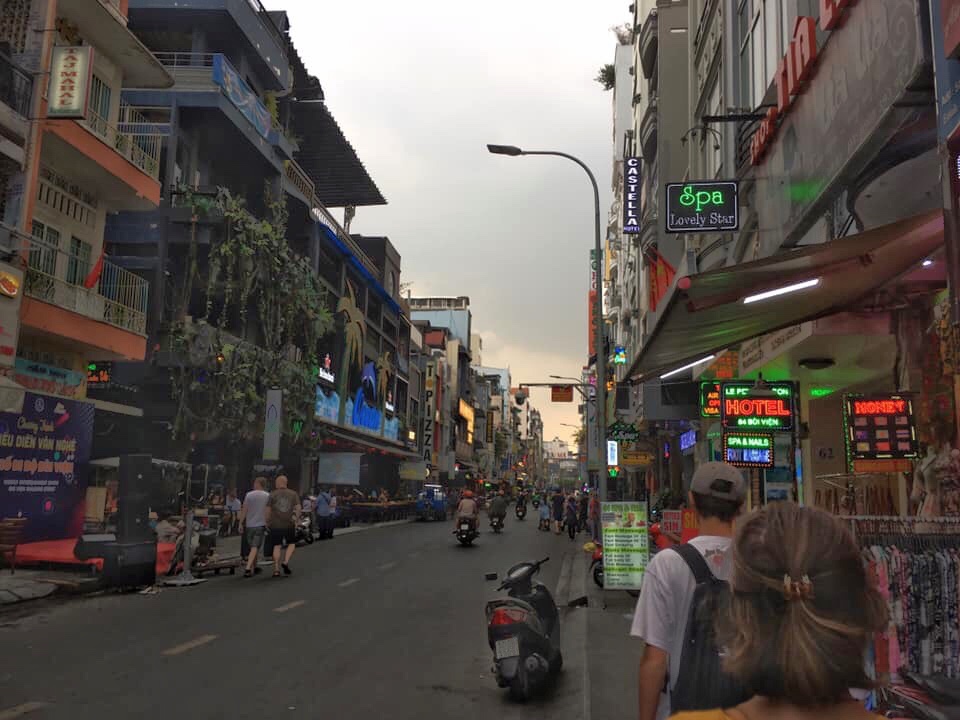 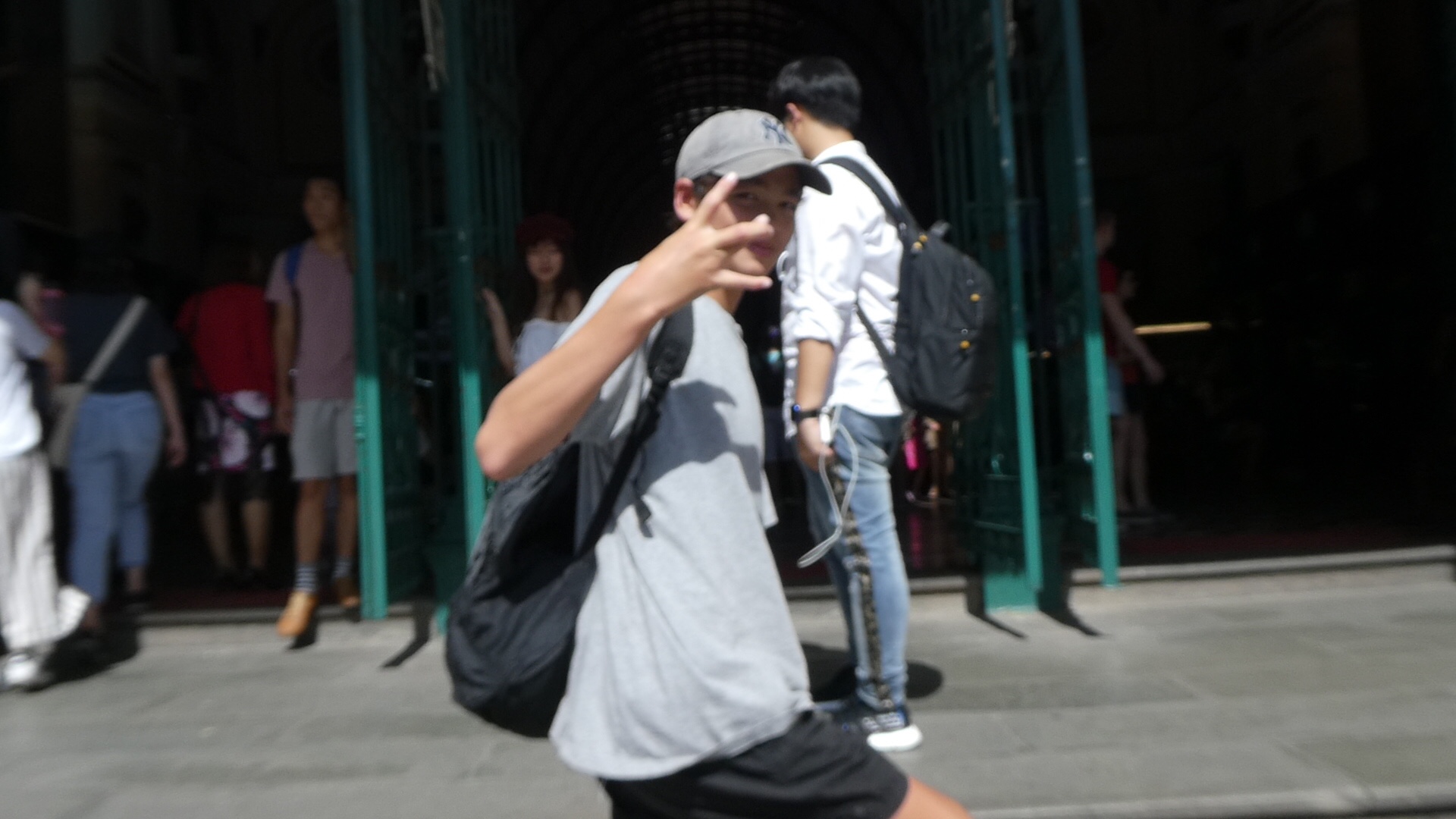 My first impression of Saigon, it looks like the old Jakarta, the atmosphere is similar like in Glodok area if you’ve been to Jakarta or live in Jakarta you know what I mean.  Busy and so crowded.  Though traffic is not as bad as in Jakarta.  But OMG I hate crossing roads in Saigon.  Even when we crossed at the zebra cross and the traffic light was literally GREEN for pedestrians, the traffic was not gonna stop for you! You just need to be very brave (and closed my eyes) and maybe ready to get hit by some crazy motorbike drivers!  Walking around the street during rush hours can feel like an impossible task! That was the big obstacle for me while we were in Saigon.  Ughh! 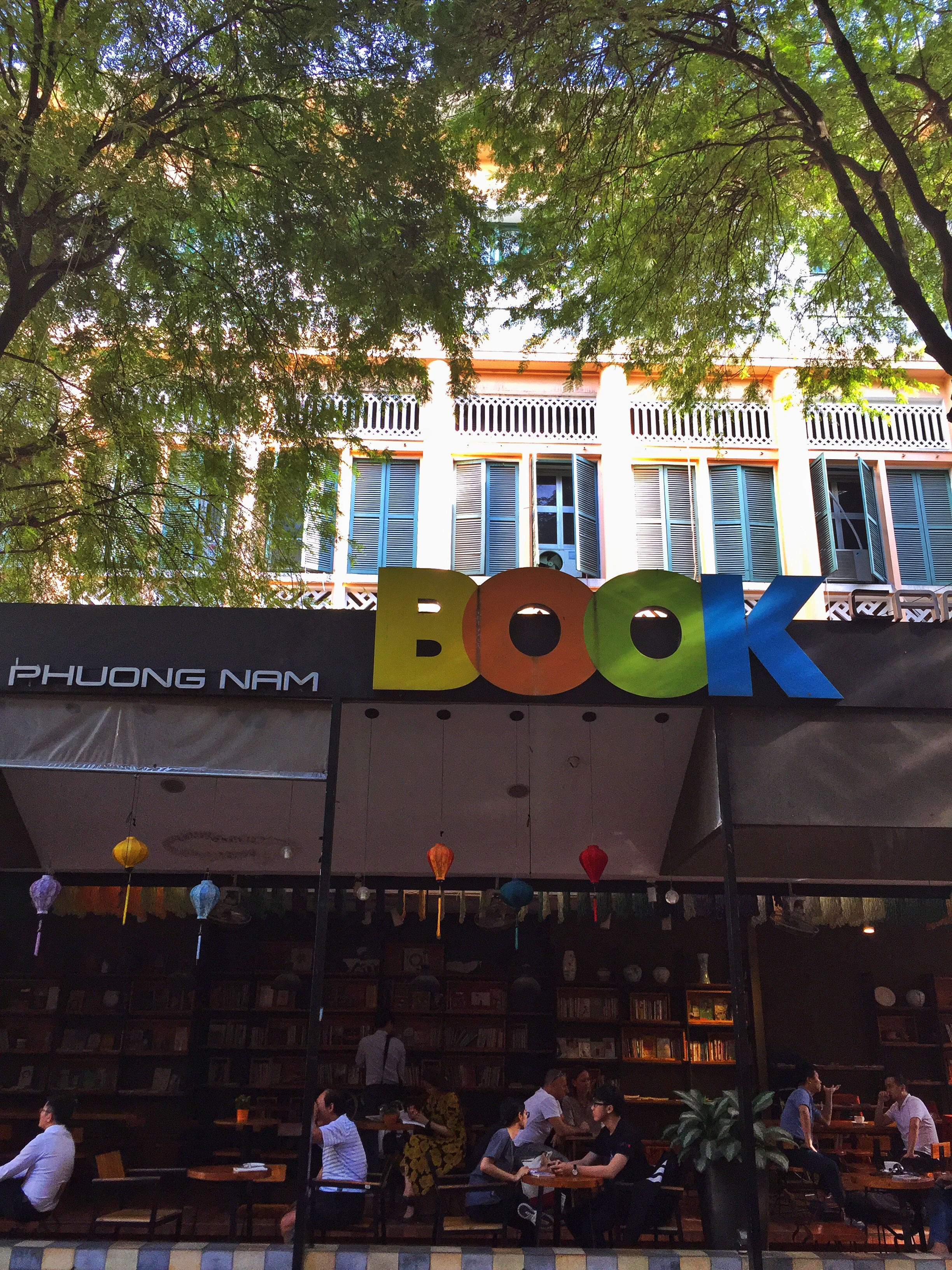 In another note food is super delicious.  I probably won’t have lots of food pictures as I am so bad at taking food picture and most of the time I forgot to take a snap, because we were always too hungry and keen to eat as quick as we could!😜 Here are some that I managed to get a snap of the food.

While we were in Saigon, we went to Cu Chi tunnel and did Mekong Delta River tour as well. The Cu Chi tunnel tour we did it through our Novotel hotel, it’s called Ginko.  It was pretty good, and the tour guide can speak pretty good English.  The Mekong Delta tour I got it from the app on Iphone, it’s called Get Your Guide.  It’s a good app, you choose what tour you want, paid online, then they will send you email to confirm and if you staying in the area they can pick you up.  Otherwise you can go to their office by taxi and they pay for your taxi as well.  For some reason they couldn’t pick us up so we went by taxi, and I got my taxi money back plus they also pay for our return taxi. 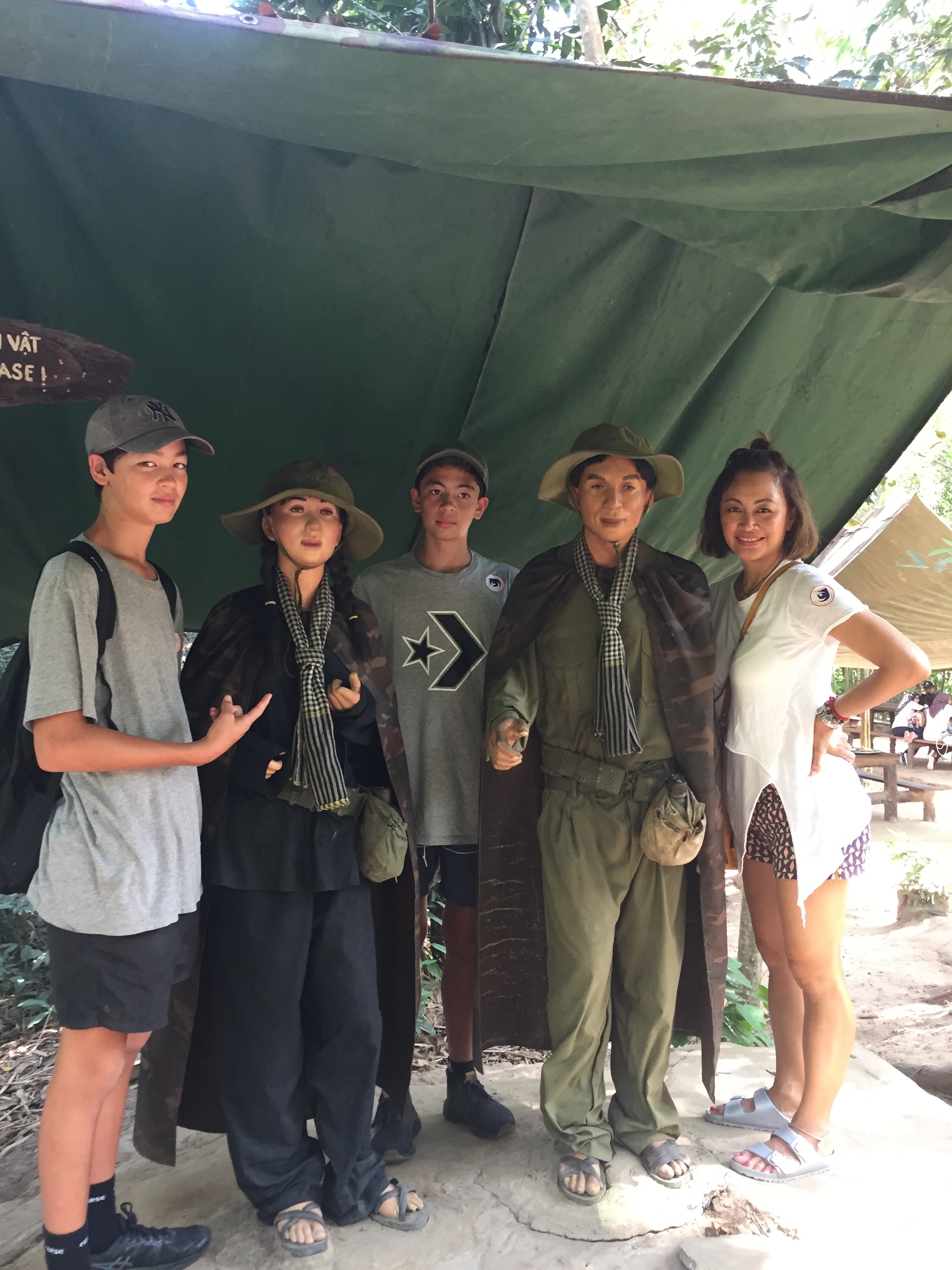 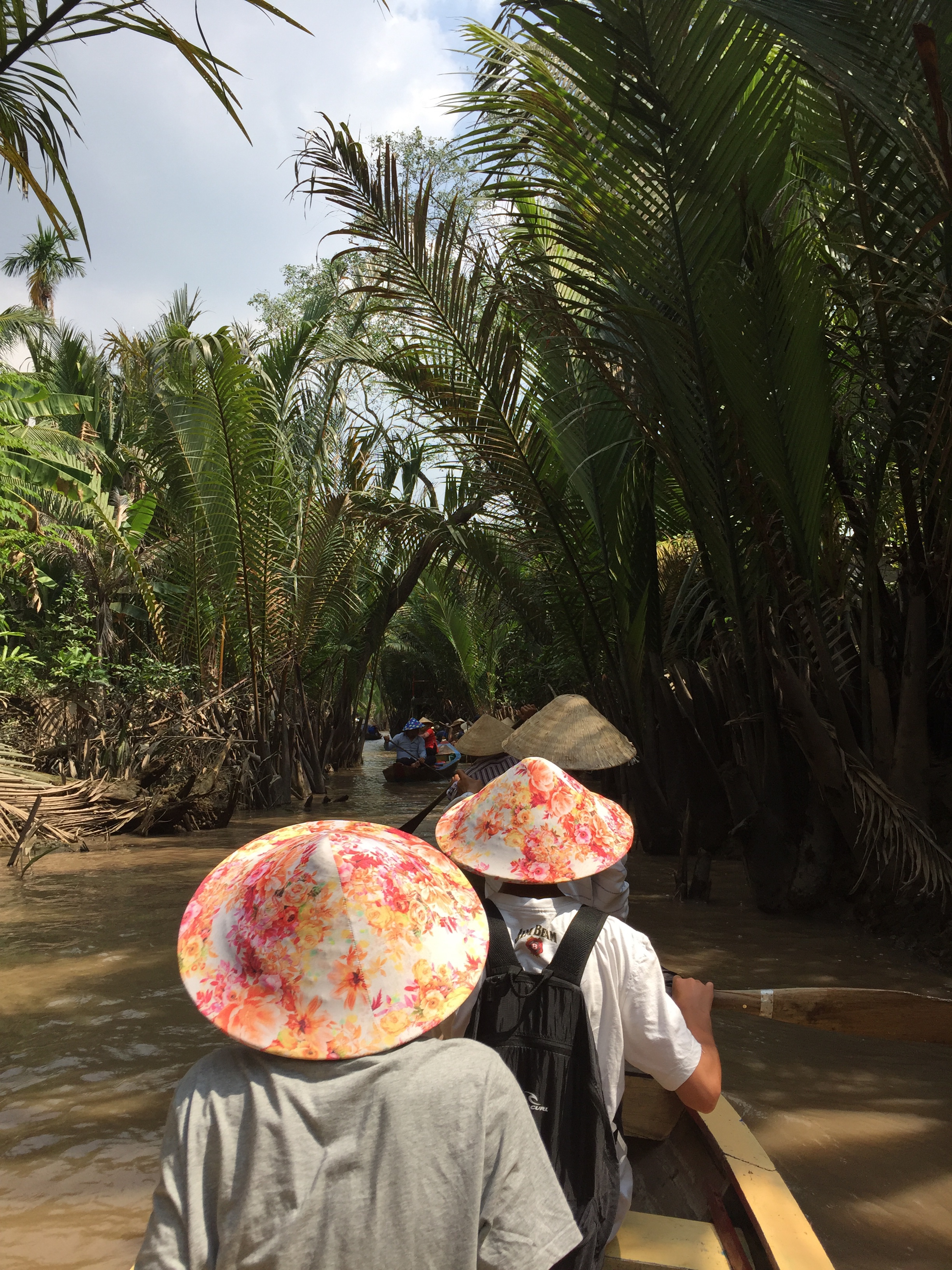 On another wooden boat ride to have lunch, and we got coconut water as a  complimentary.

Then after lunch we had a visit to this gorgeous temple but I forgot what it is called.  Sorry. 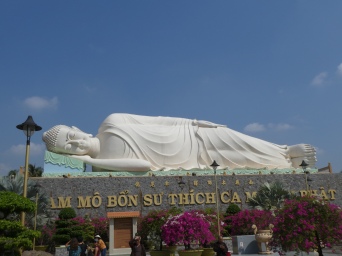 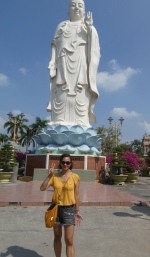 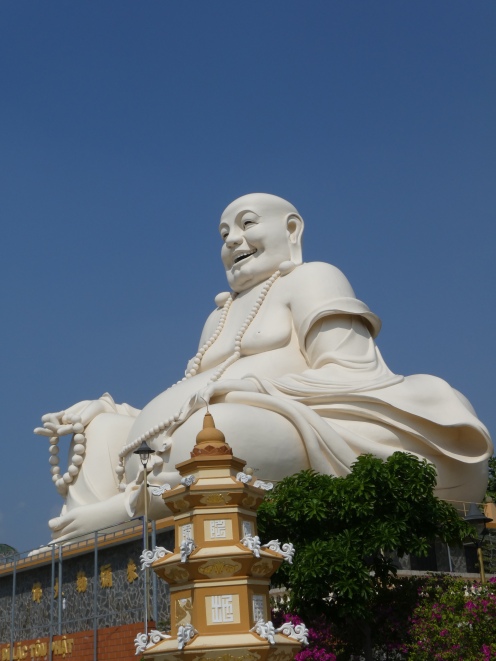 Banh Thanh market and Banh Thanh street food market are my boys fave place to shop and eat 😝  Also we love Boazy, a local restaurant with super yummy baos and every thing else in that restaurant is just so good.  We went back there 3x I think, and our favourites are, baos, roasted potatoes, mango smoothies, and watermelon juice. 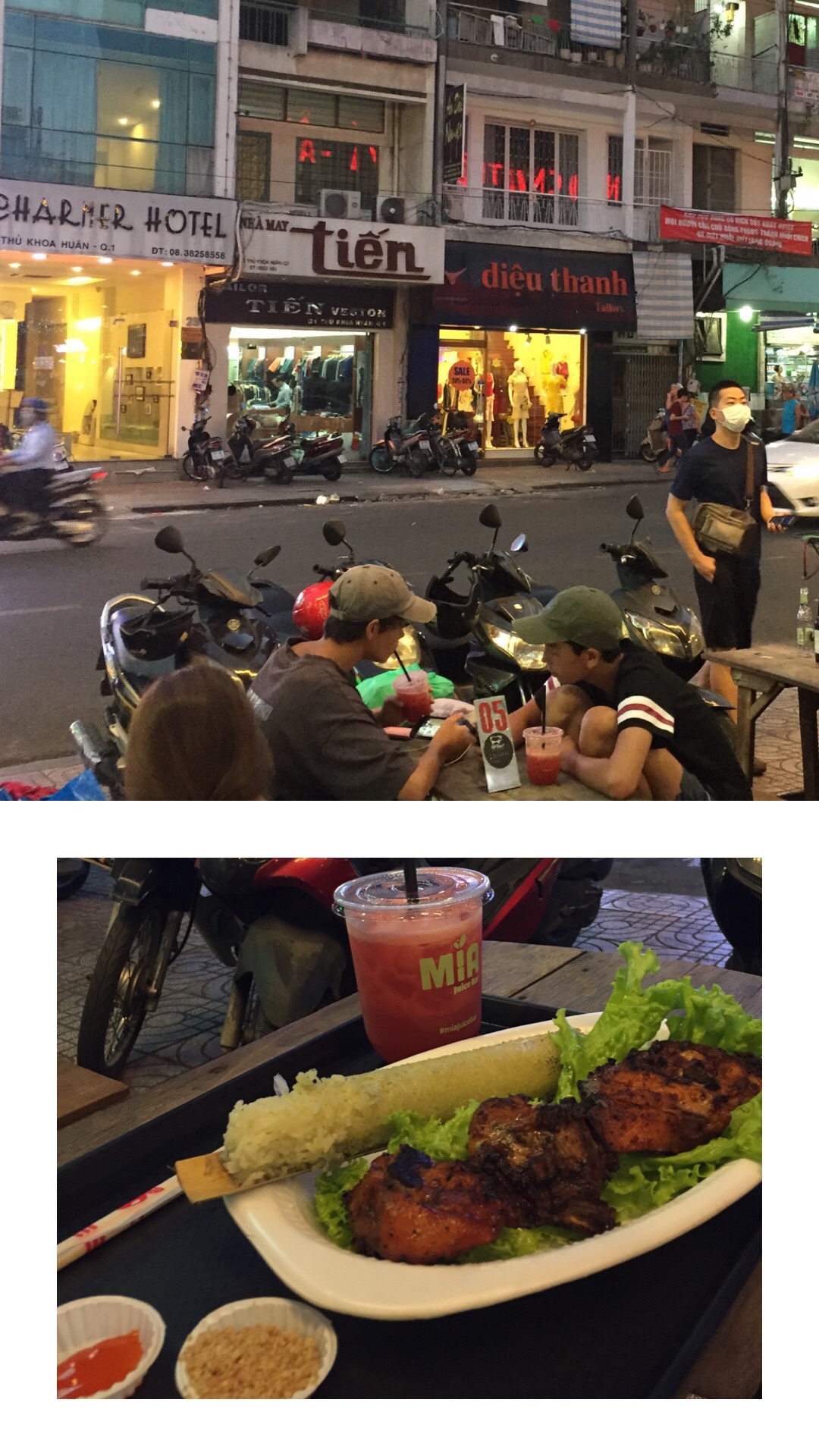 We flew to Da Nang from HCMC airport and continued by car for about 45 minutes drive to our villa in Hoi An. By the time we got to our villa it was almost close to 6.30pm.  So, after checked in and every thing else, we decided to have dinner and looked around at  the old town of Hoi An

Pretty colourful lanterns is every where at old town Hoi An.  So gorgeous. 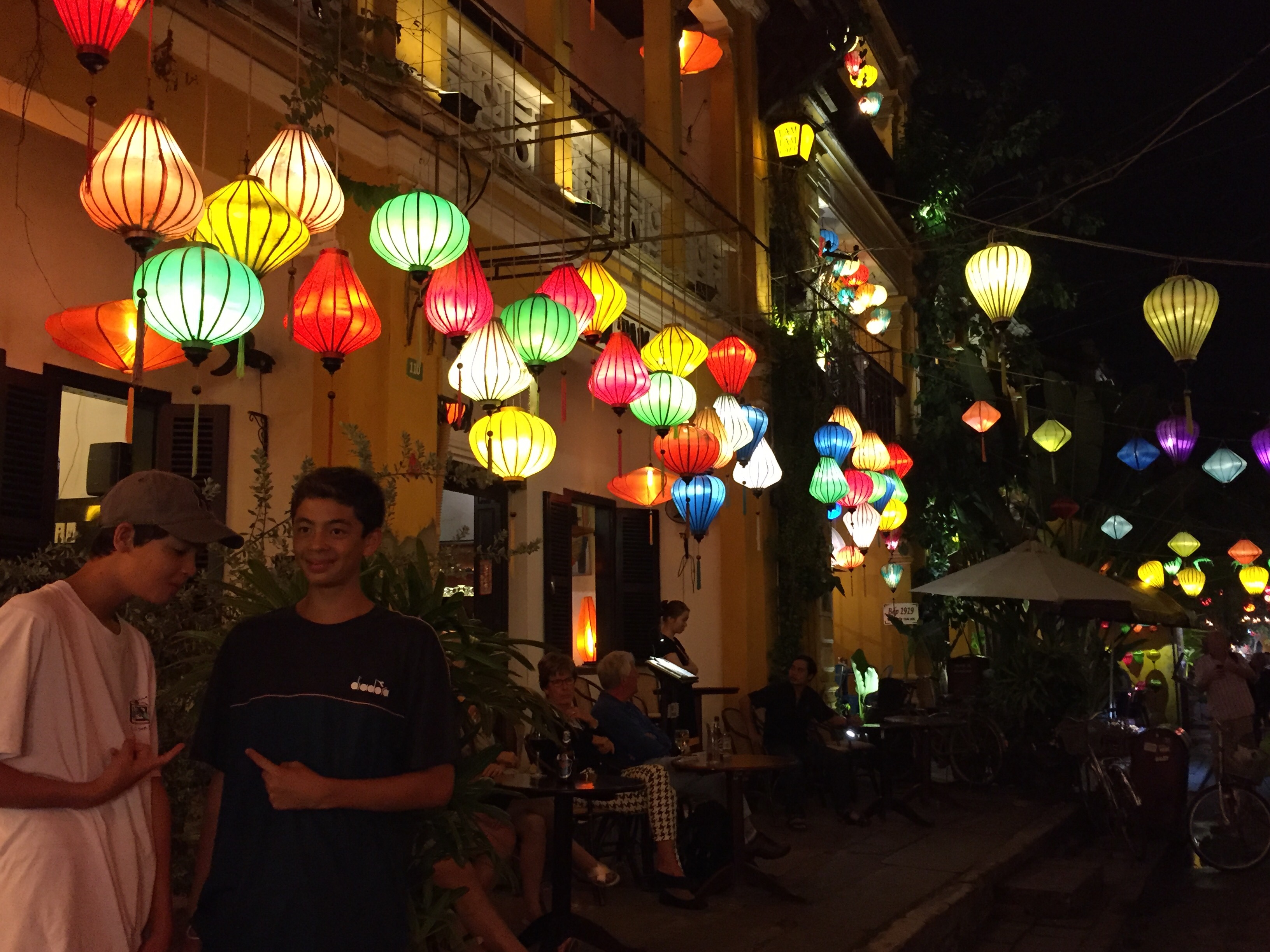 We rented a car and went to Ba Na Hills.  Ba Na Hills is located 35km south west of Da Nang.  Unfortunately when we got there the weather was pretty much bad.  It was heavy rain, very windy, cloudy, gloomy, you named it.  Otherwise it would had been a wonderful day!

We took a ride on the world’s longest and highest cable car, again, the view would had been spectacular if the weather wasn’t so gloomy. According to Guinness World Records, Ba Na cable cars hold two records: first, is the world’s longest single cable car system (5,042.62 m long) and second is  the world highest gap between its departure and arrival station (1,291.81 m high). 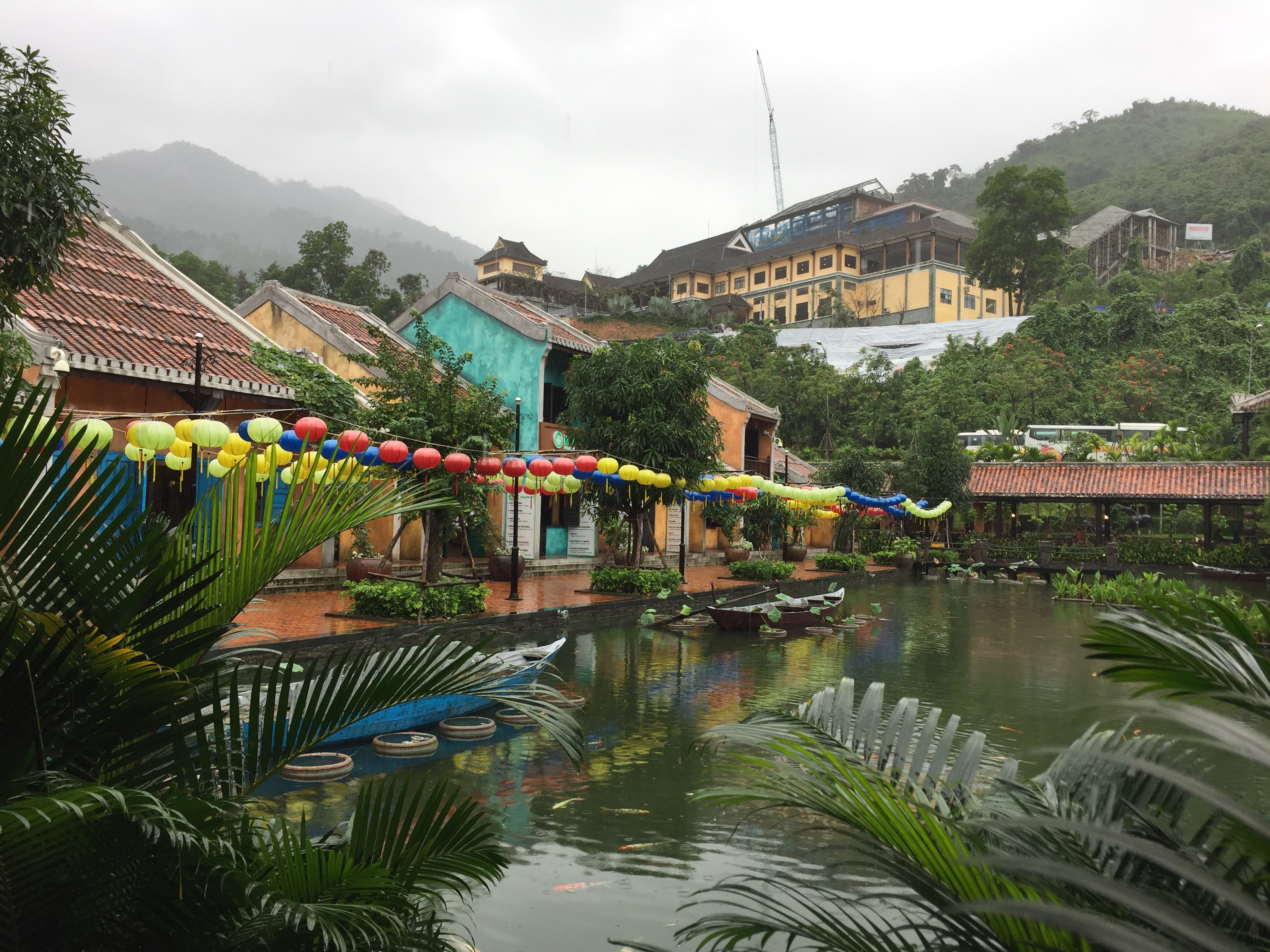 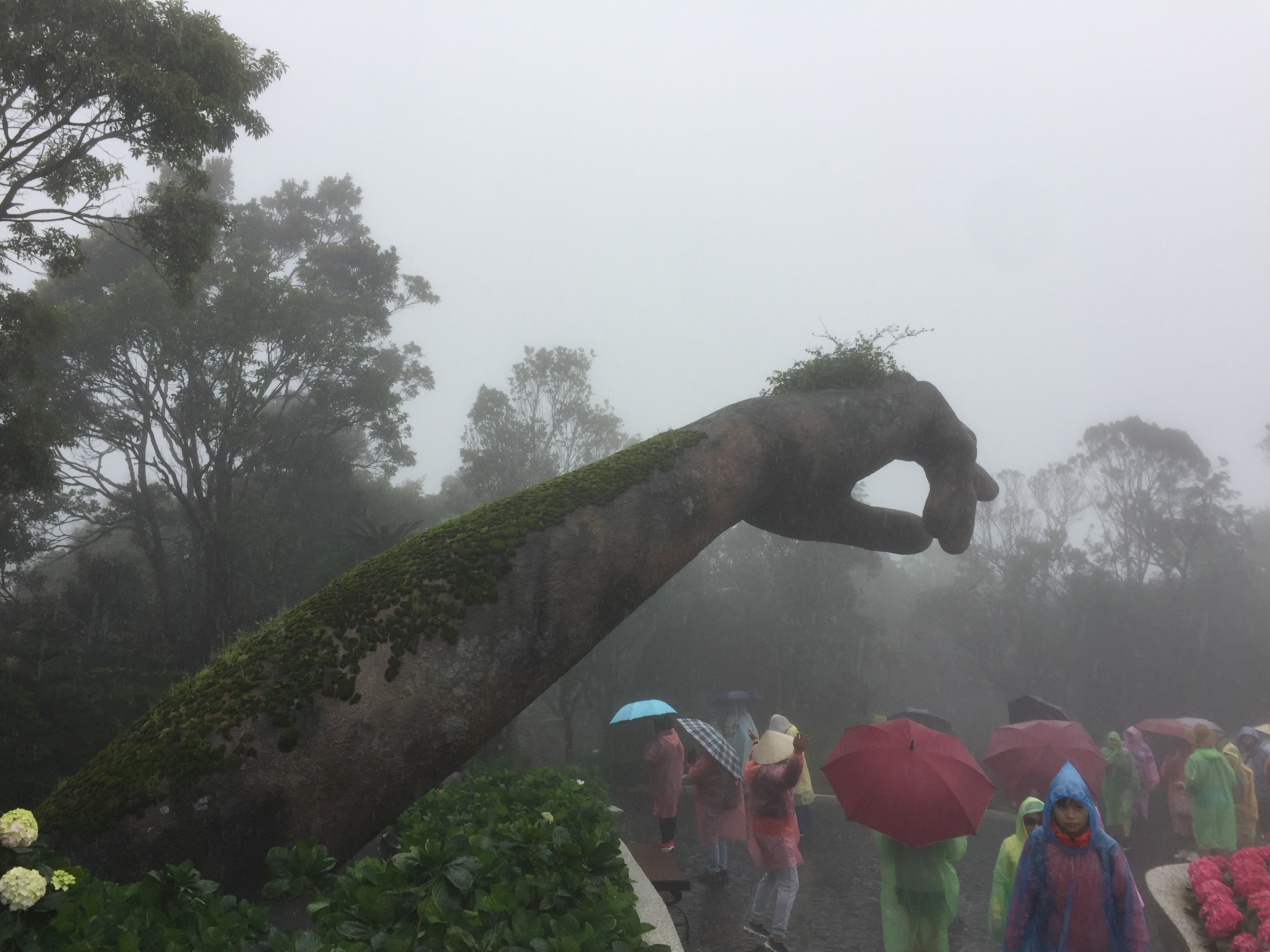 Ba Na Hills is huge so if you want to explore the whole area you probably need the full whole day.  There is 3 floors amusement park and you don’t need a ticket, just line up.  There is a short trekking to the top of the mountain (1487m) if you’re adventurous enough.  In my personal opinion this Ba Na Hills is kind of like Disneyland.  There’s French Village with all those man made castles and palaces and also many cafes/restaurants that unfortunately few of them were closed when we were there!

Marble Mountains is our highlight of this trip. Located just off the Da Nang beach coastal road, from the airport on your way to Hoi An you’ll pass this big mountain topped with pagodas.  Marble mountains are a cluster of five hills made from limestones and marble.  Each mountain is named based on five natural element to represent ; water, wood, fire, metal, and earth. It’s a well known pilgrimage site with peaks, caves, tunnels, and temples 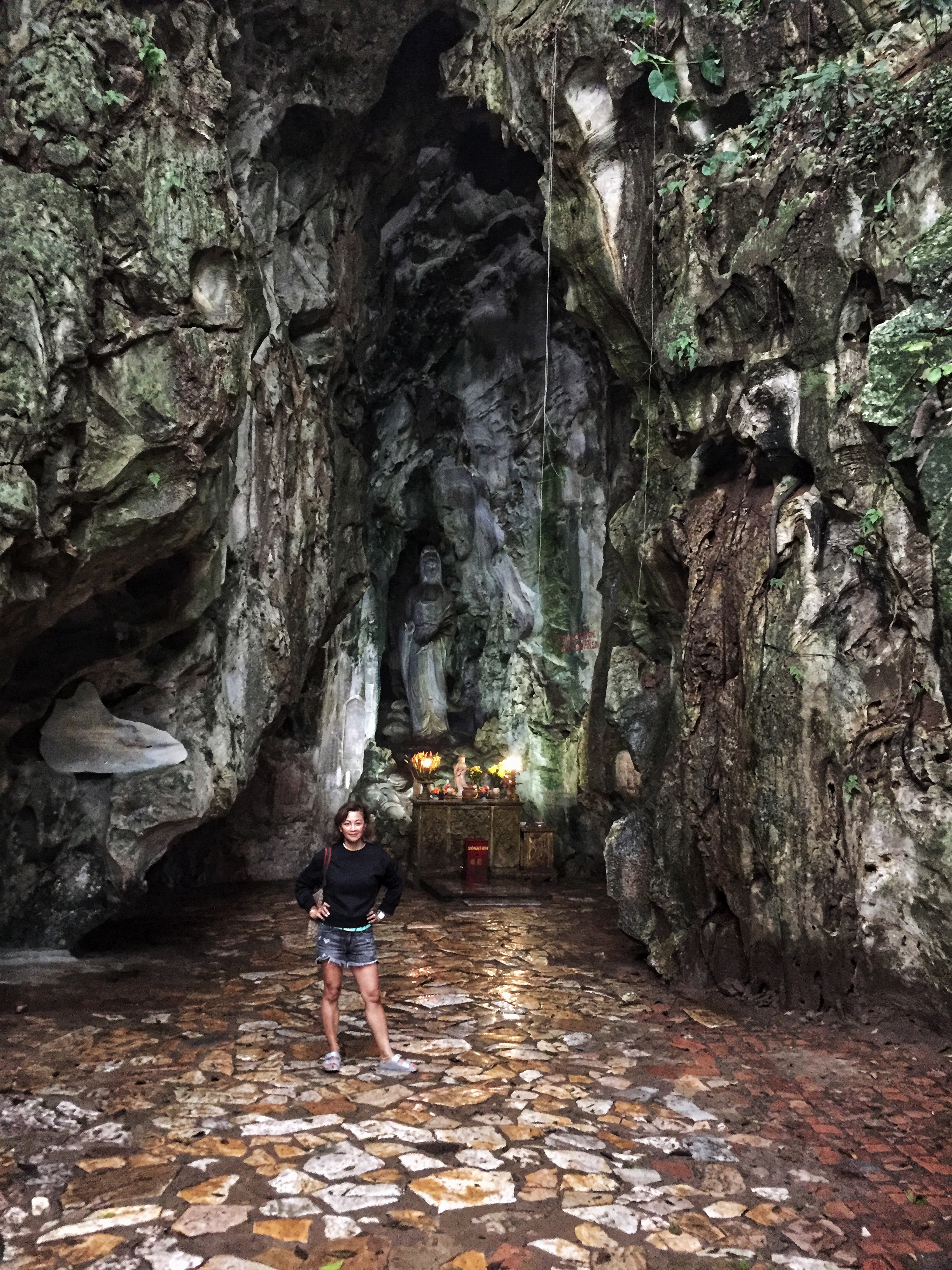 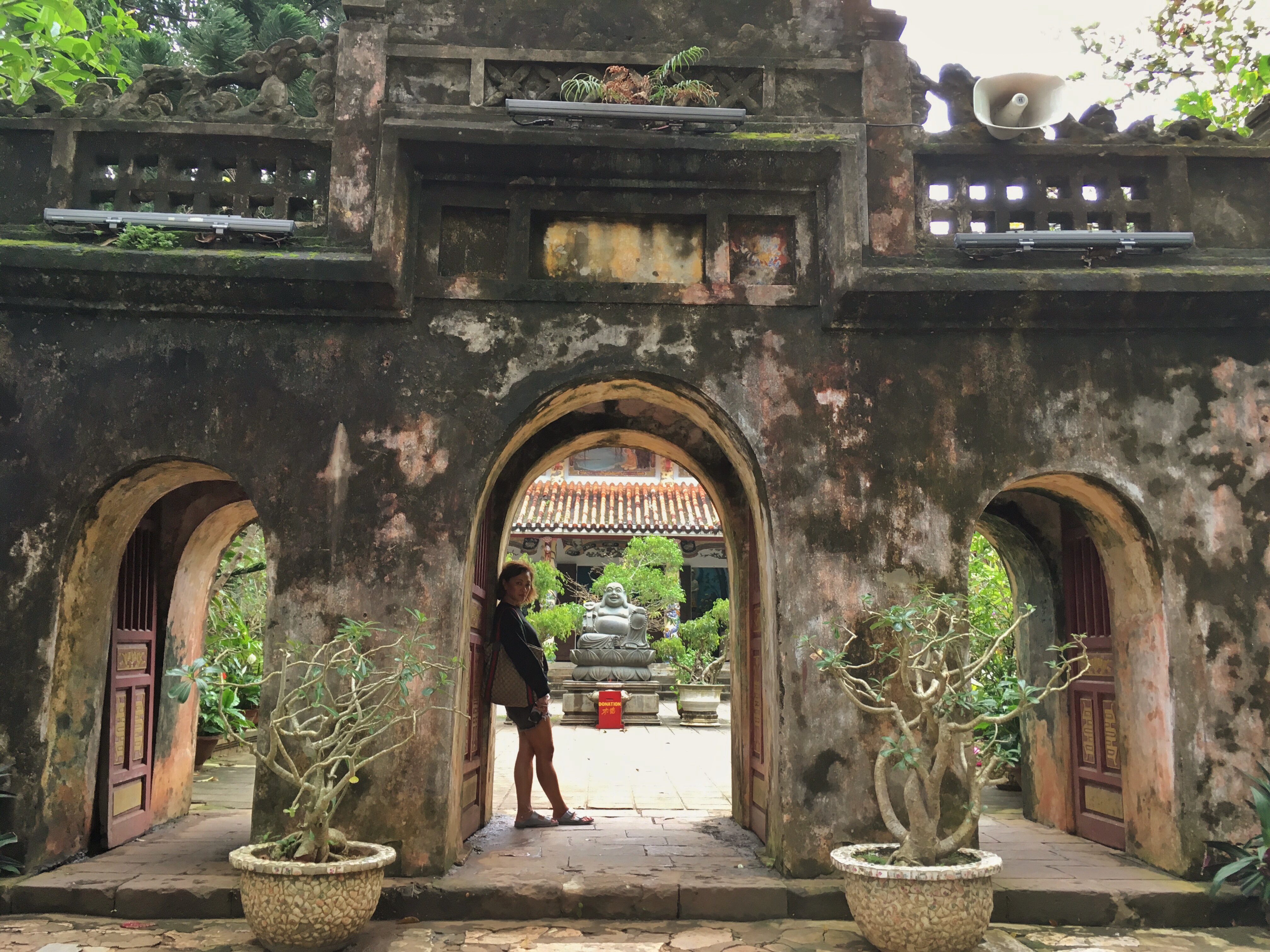 It was fun hiking the hills, we took elevator to go up to save energy and to be quick before the rain started again, but we climbed down on the way back.  There are lots of stairs and also there is mini gorge, a shallow cave with a Buddha and Cathedral like cave with an opening to the sky.  So amazing and gorgeous.

I still have so many pictures taken from our holiday that unfortunately I can’t put all here.  It just so time consuming, and perhaps will bore you much too…😛 I might put some on my Instagram later.  Below is the video compilation made by my DS, I hope it will give you a bit glimpse of the places we’ve been.

Travelling with two teenager boys can be tricky sometimes.  Most of the time we got along well, though!  The thing is for my boys, I have to keep them busy during the day.  And in between, lots of swimming in the pool, bike rides, and feed them good.  In the evening is more for leisurely times where we hit the shops or markets and try lots of food and dessert 😜

Thank you my darling boys for coming to Vietnam with me.  We have survived the red eye flight, navigated the craaazy Saigon’s traffic, the banter with taxi drivers,…..and 24/7 together!  Thanks for putting up with your psycho mum and for pausing just for one sec to capture this moment with me (though the pic wasn’t a good quality one, but I kinda like it)

Another summer of memories made 💙 Love my tribe 💙 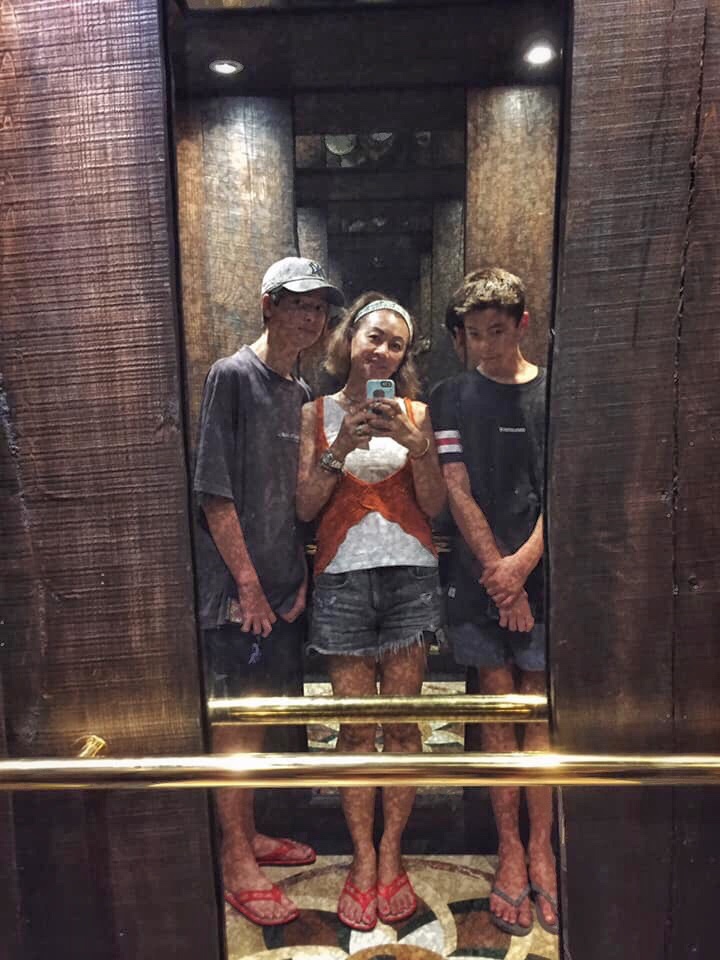 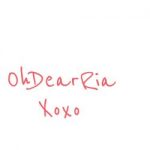